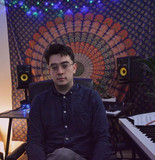 Romain Quessaud is a composer and sound designer with a passion to explore the relationship we have with sound. Through experimenting and mixing electronic and acoustic music, Romain enjoy adding and creating a sonic world to the picture and the story. He has a keen interest for films and other art forms which depict reality, life, and all the deep meanings surrounding it, while not being afraid of innovating in the process to create a unique piece of art. Drawing inspiration from the classical composers such as Liszt, Chopin, and Debussy, but also more modern electronic composers such as Jon Hopkins, Nils Frahms, and Olafur Arnalds, Romain feels a constant need to learn and experiment within the craft of music. Originally from France, Romain moved to Australia and graduated in 2018 from QUT, and is now back in Europe working as a freelance composer and sound designer. Romain works with creative from all around the world, and has travelled to many places around the world to collaborate with amazing musicians and talents.