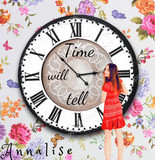 Annalise is a young Singer/Songwriter from Australia, highly motivated and devoted to her craft. She enjoys creating music in a variety of styles such as Pop, Electronic and Pop Rock. Her songs range from fairly light and catchy to deep and powerful. She has a unique gift at touching people’s emotions.   Her musical talent becomes evident once the listener is enveloped by the beauty and warmth of her vocals.It is no wonder she is slowly building up a worldwide fan base.   To date she has released 17 singles on all major social media platforms and is receiving a large amount of airplay on many community radio stations around Australia as well as overseas. Among them, Indie Star Radio has played a major role for continuously providing opportunities to support her music on a range of shows and countdowns whilst also nominating her for Female Artist Of The Year. She has also been interviewed with the renowned commercial radio SBS Australia, with her previous singles being premiered on the show. Annalise continues to journey forward in her musical career building connections with those who love and appreciate her music.