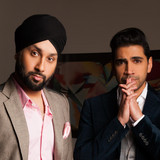 Canadian music group "JoSH" were formed in Montreal, Canada in the late 90's.

Comprised of members Rup Magon and Qurram Hussain, JoSH has been producing, writing, and singing hit songs for over two decades and have performed in more than 25 countries. They have released four chart-topping albums selling more than three million records worldwide, most in India and Pakistan.