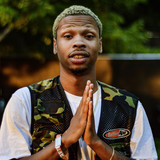 Greg Landfair Jr. aka Stix started drumming 13 years ago as a freshman in high school, playing in his basement—by sixteen he took second place in the national Next Great Drummer competition, second only to a veteran drummer twice his age. By 19 he played along side Frank Ocean at Coachella in 2012, in 2013 with Kids These Days and 2014 with Chance the Rapper and the Social Experiment   As Stix continues to evolve as a collaborative and individual artist he is often looking for ways to contribute to the uniqueness of projects whether that be the sound of live drums, production of a song or interesting vocals on his own tracks.  Since flexing his production skills, Stix has become a platinum producer w SZA, won a Grammy w Chance the Rapper for production on Coloring Book , and played Coachella with Frank Ocean.