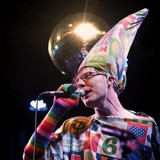 Indie song & dance man The Bedroom Philosopher is a whip-smart maverick of jollies and jazz-chords. The Tassie born “Jarvis Cocker of Stand-Up” rose to fame with a songwriting segment on Triple J’s Morning Show. He has gone on to release several albums including the genre-hopping Songs From The 86 Tram. His live performances are madcap affairs where a love for improvisation shines. As one reviewer said BP is "obviously uncomfortable with himself, although very comfortable with the audience." In 2006 his oddball opus I’m So Post Modern was a Super Request hit, being voted #72 in Triple J’s Hottest 100. The single was taken from the debut album In Bed With My Doona described as “the Sgt. Peppers of indie folk-comedy." In 2010 the laser-sharp parody Northcote (So Hungover) became a hipster-slaying anthem. The rock-dog adorned video won international awards and gained half a million views. Songs From The 86 Tram was a sell-out at Melbourne Comedy Festival, taking out the Directors Choice award. It might have gone on to win best show if BP hadn't been car-doored on his bike (on the 86 line) and broken his humerus.  The Bedroom Philosopher has appeared on Spicks and Specks, Adam Hills Tonight and Melbourne Comedy Festival Gala (but just wants to guest program rage.) He has supported Amanda Palmer, Tripod, Peter Combe and himself. Under his own name Justin Heazlewood he has released three books including a self-help book for artists and childhood memoir.