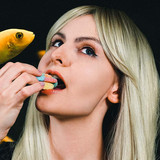 Born in after-soviet times and raised in times of wild capitalism, Fanera is a singer from Lithuania who has so far released numerous singles that have gained local media traction.

Mixing and matching pop with a spice of gabber and techno, Fanera has been picked up by national radio stations, some playing her songs every other night. She released her debut single Koziris in mid 2019, followed by Valgyk, Venera and Čiop Čiop. Fanera should not be taken for granted. For now she is defined by western fashion and eastern identity, but this may only last for so long. Preconceptions are the devil.