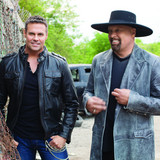 Country duo Montgomery Gentry evoked the sound and spirit of Southern rockers like Lynyrd Skynyrd, the Marshall Tucker Band, and Charlie Daniels, painting themselves as rowdy redneck rebels who still held small-town values. After hitting the country Top Ten multiple times between 2001 and 2003 (peaking at number two with "She Couldn't Change Me"), the duo's first number one country hit came in 2004 with "If You Ever Stop Loving Me." Montgomery Gentry made it back to the top four more times, with "Something to Be Proud Of," "Lucky Man," "Back When I Knew It All," and "Roll with Me." Troy Gentry died tragically in a helicopter crash in 2017, but Eddie Montgomery vowed to continue the group as a legacy. Eddie Montgomery and Troy Gentry first played together in Early Tymz, a Lexington, Kentucky band led by Montgomery's brother, future country star John Michael Montgomery. Both Eddie and Troy had been performing on the local club scene since their teenage years, the former as a drummer in his father's band. After Early Tymz broke up, a new group called Young Country formed from its ashes, with John Michael billed out front. He eventually went solo, of course, and Montgomery Gentry first formed not long after, initially calling themselves Deuce. After playing around Lexington for a time, Montgomery Gentry landed a deal with Columbia thanks to a showcase performance. Their debut album, Tattoos & Scars, was released in 1999 and made the country Top Ten on the strength of the Top 20 singles "Hillbilly Shoes" and "Daddy Won't Sell the Farm," plus the Top Five smash "Lonely and Gone" and the Charlie Daniels collaboration "All Night Long." They were named the CMA's Duo of the Year in 2000, breaking a run of eight consecutive years by Brooks & Dunn. In 2001, the follow-up album Carrying On was released; it also made the country Top Ten and produced the number two smash "She Couldn't Change Me." A third album, My Town, was completed quickly and released in 2002, bringing the duo their third Top Five hit in the title track. The hard-driving You Do Your Thing arrived in 2004, followed by the greatest-hits collection Something to Be Proud Of: The Best of 1999-2005 in November of 2005. Some People Change appeared from Columbia Records in 2006, followed by Back When I Knew It All in early 2008. It all amounted to a pretty successful track record, with a dozen or more of their singles since 1999, plus all of their studio albums, entering the Top Ten charts (as did the greatest-hits collection). The duo's eighth studio album, Gravel Road, appeared in 2010. The Michael Knox-produced Rebels on the Run, the duo's first album for new label Average Joe's Entertainment, appeared in 2011; it debuted at nine on the Billboard country charts. A digital-only EP called Friends and Family showed up in October 2012, and after two years of solid touring the duo signed to Blaster Records and released the full-length Folks Like Us in June 2015. Amidst plans for the release of Montgomery Gentry's ninth studio album in 2017, Troy Gentry was killed in a New Jersey helicopter crash on September 8 of that year, shortly before a scheduled concert by the duo. He was 50 years old. Here's to You, the album completed prior to Gentry's death, saw release on February 2, 2018. By that point, Eddie Montgomery had laid plans to continue touring and recording under the name Montgomery Gentry. ~ Steve Huey & Steve Leggett, Rovi