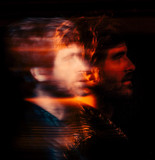 After a chart-topping major label career, numerous TV appearances, and hundreds of sync placements Colton continues to expand on the label “singer-songwriter.” He has logged thousands of miles on the road and shared stages with some of music’s biggest artists including Dave Matthews Band, John Mayer, Needtobreathe, Kelly Clarkson, Better Than Ezra, Counting Crows, John Mellencamp, Maroon 5, Guster, and many many more. It wasn’t until he returned home to Oklahoma City however that he truly found his footing. Aside from operating Lunar Manor studios, and regular collaboration with Chad Copelin at Blackwatch Studios, he co-owns and operates Oklahoma City’s most talked about music venue, The Jones Assembly. ‘Ive learned to find the perfect balance in my life between family, and music and I honestly feel like I’ve finally found my voice.' Graham continues to release new solo material almost as quickly as he records it including the new album 'Inside Out.'