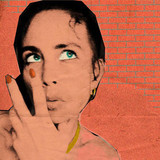 Jenny Wilson is a Stockholm based artist and producer and EXORCISM is her fifth album, out on her own label, Gold Medal Recordings.   During the years her significant sound has developed into a darker, more electronic style. Since the debut, ’Love & Youth’ (2005), she has worked with specific topics for each album. On her forthcoming 'EXORCISM', she is exploring the brutality of violation and rape in an unique take with lyrics that are viciously upfront, and music that's so relentlessly catchy, that it will make you want to dance all night. If it's dark? Yes! But it never gets obscure.   Her last album, DEMAND THE IMPOSSIBLE! (2013) acclaimed a lot of attention and was awarded with three of Sweden’s prestigious Grammis - Album of the Year, Producer of the Year and Video of the year. She has previously collaborated with contemporaries including Robyn and The Knife, just to mention a few.