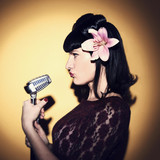 Songwriter and performer Lily Frost is a cocktail of sound infused with 60's pop, swinging hard, spiked with Latina, and a dash of twang to boot. Sounds like a Hollywood film don't it? A prolific songwriter and a darling of the sync world her theme song and score work for hit t.v. show Being Erica garnered a Gemini nomination. Some other syncs include her songs being placed in Grey's Anatomy, Charmed, Felicity, Workin' Moms, Degrassi, and the Disney film Crazy Beautiful with Kirstin Dunst. As an international touring artist, she brings rare, seductive sophistication and heartfelt drama to the live stage. Lily Frost has shared bills with Coldplay, The Dandy Warhols, Big Bad Voodoo Daddy, and Pink Martini to name only a few. Always having been inspired by foreign retro films, Lily's sound is cinematic, alluring, and distinctive. If James Bond were a woman, Lily's music would be the soundtrack. If Leonard Cohen, David Lynch, and Wes Anderson had a baby... it would be named Lily Frost. Her most recent album, Retro-Moderne, is produced by Gus Van Go and is a perfect pairing of artist and producer.