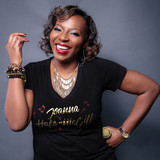 www.joannahalemcgill.com Joanna is the loving wife of Jarmell McGill, proud mother of Jayla and Ja’Miya, Actress, Business Owner and Praise & Worship Leader of His Will Worship Center in Slidell, LA. Joanna currently resides between Louisiana and Mississippi with her husband and two daughters. Joanna has always served in the music ministry throughout her life. She is quickly becoming a sought after artist and award winning gospel singer. Joanna recorded and performed her new single, “Open Door” written and produced by Detrick Haddon in Orlando at the Tom Joyner Memorial weekend event. She also recorded a new Top of The Hour Jingle for the Tom Joyner Morning Show.

Currently, Joanna is hitting the ground running as a new actress! She is also completing her freshman album with McGill Music Group that will be released in the early Spring 2019.