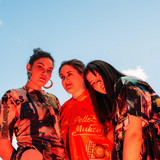 Pink Matter are redefining what it is to be an all-female band. Following a long line of women doing it better for themselves - from The Supremes, to Destiny's Child, The Spice Girls, TLC, HAIM, and all the talented powerful women in between - Pink Matter are shaping this tradition in their own way on Australian shores. Crafting a unique intersection between neo-soul, jazz and dance genres, the three-piece have quickly developed a devoted following in their hometown of Brisbane and beyond. Evoking notable hints of KAYTRANADA, The Internet and Koi Child, their debut 5 track EP Human Error

(Grammy-nominated engineer/producer Nick Herrera) was released in August 2018, and the group have since then earned support slots for Unknown Mortal Orchestra, Harvey Sutherland and The Internet and been booked for the country’s biggest festivals, Laneway and Splendour In The Grass. This year, Pink Matter were the worthy recipient of a 2020 Queensland Music Award in the Soul, Funk & RnB category.