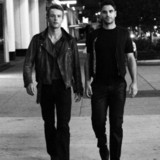 Harmony-driven acoustic pop. Oliver and Sebastian -aka The Pigott Brothers- shot to national fame on the last season of Canadian Idol as the first sibling finalists in the franchise’s history. The two got their start in the band Laughing Sam’s Dice, who made waves in the Toronto Indie Scene in the early 2000s with appearances on CBC’s Jonovision and profiles in The Toronto Star and The Globe and Mail. The Brothers’ blistering debut album “Pigottry” and the MuchMusic video for its single “Rich Man” were released to wide acclaim. This was followed by the overwhelmingly received release of their love song “Alien Like You”, which they wrote for Sebastian’s rock star character Kai in the international hit television series “Being Erica”. Their second album, “The Age Of Peace”, was recorded, mixed and mastered at CBC Studios in Toronto. It was released September 14th, 2012. When their busy schedules allow, the brothers have been known to collaborate on new material.

Talks of a 3rd album are always in the air, but yet to be confirmed.