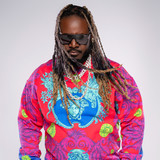 Since emerging in 2004, T-Pain not only changed the course of pop, hip-hop, and R&B, but he also reshaped the fabric of the culture itself. Beyond moving over 50 million singles, gathering billions of streams, picking up six GRAMMY® Awards, and selling out shows on multiple continents, his voice could be heard loud and clear as “All I Do Is Win” soundtracked President Barack Obama’s entry into the White House Correspondents’ Dinner, during the “most popular” NPR Tiny Desk concert in the series’ history, and when he shocked audiences everywhere as the first-ever winner of FOX’s smash The Masked Singer. The Tallahassee trailblazer’s influence now transcends generations. Simultaneously, the man born Faheem Rasheed Najm shines as a Twitch phenomenon and uber popular streamer, label honcho for Nappy Boy Entertainment, expert drift driver, actor, and author with his literary debut Can I Mix You a Drink in 2021.