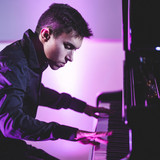 Releasing his debut in 2015, Pavel Vondráček launched his career of a pianist and composer. The student of Berklee College of Music in Boston and Czech pianist, composer, multi-instrumentalist and vocalist decided to release his first original album "Love Stories" on December 10, 2019. "Love Stories" is an album full of emotion from his very first love relationship. It offers a very intimate confession engraved into the instrumental music somewhere in between the classical and popular genres.Born on June 11, 1998, in Havlíčkův Brod, the Czech Republic, Vondráček began playing the piano at the age of 3 or 4 at local music and art schools. It was not before the age of 16 that Vondráček started to play classical music on piano, compose and improvise and start to work with synthesizers or samplers. In 2015 Vondráček released his debut piano solo album, which contained 13 cover songs and 4 original improvisations. As the artists explained, "Lost in the Wind was a gorgeous experience getting to know the studio work and the environment there." In 2016 Vondráček was the leading founder of Klaviatura, a Czech piano music magazine focusing on both the classical and popular piano music locally and internationally. Simultaneously, he started composing for his second album."Love Stories" is coming out in December 2019 and will be supported with associated live tour. The tour begins in the Czech Republic and moves to the USA in 2020.