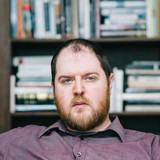 Since 2010, Jom Comyn has been embraced by fans across Canada and around the world for his "snowglobe folk" songwriting and his singing voice, which was been likened to velvet, Lee Hazelwood, Bill Callahan, or a "cartoon bear". He has charted on campus radio across Canada, received airplay on CBC and BBC6, appeared on festivals like Pop Montreal, NXNE and Sled Island, and has

played on stages from Victoria to Halifax, from Prague to Reykjavik, from Hiroshima to Sapporo. He lives in Edmonton.