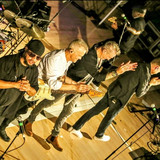 aliensdontringdoorbells comprise Dorian Foyil (guitar, sax, backing & lead vocals), Adam King (lead, backing vocals) and Christian Pearl (keyboards, backing vocals). The band took their outlandish name from a conversation Foyil recalled witnessing between an old man and Foyil’s (then) six year old son on a New York subway platform a number of years ago: the old man appeared to be talking to himself until he turned to the boy and said, “it’s because aliens don’t ring doorbells.” To the guys in the band, the phrase ‘aliens don’t ring doorbells’ has some ring of truth to it and the name kind of felt right. Their debut album, Arrival consists of

insanely catchy tunes which might just persuade you that it’s possible to reinvent the mainstream – if not, in fact, the wheel. Songs like Story, Slipping Away and Consummation are inspired and intrepid blasts of mid-Atlantic rock – oh yes! – that will have you reaching for your hairbrush or tennis racket or whichever household implement stands in for rock n’ roll paraphernalia these days. And, just for the record, you’ll still be standing up and singing whatever you find yourself doing at that magical moment.