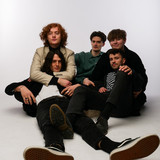 Concord Drive is a five-piece alternative rock band from Swindon with Jacob Vincent on vocals, Matt Clark on guitar, Nathan Prothero on guitar, Martin Blunt on bass, and Jack Lewis on the drums. As a newly introduced group, Concord Drive is out to grow within their hometown, an already thriving music scene. Having released their debut single “Bad Intentions” to local success, they’ve caught the attention of BBC introducing who said, “They’re one of those guitar bands taking an instrument that you’ve heard a bazillion times, and doing things no one has ever done before”.   Their new single "Don't Wanna Be" has taken the band to new heights Having already had multiple plays across BBC Introducing in the west and frequent radio plays across Europe and America. The song was recorded in St Helens with the Duo at SugarHouse Productions best known for their work with Viola Beach, Larkins, and THE FEENS. the step-up in quality is something the band wants to continue forward in and keep pushing the boundaries. Make sure to follow the band on Instagram, Twitter, and Facebook to not miss any gigs or updates   CD