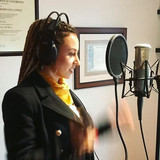 S.B-King© is an international multicultural singer and composer who merges her Latin and European roots into her own eclectic musical style. With her Colombian-Dutch background, S.B-King© is able to combine effortlessly Latin extroversion, elegance and joy of life, Reggaeton, Reggae, Dancehall, with the steadier introvert Rock, Blues and Country moods. The songs are spun around existential lyrics of her sister, Michelle Becking Fernandez, electric guitar sounds of her father Marnix Becking (ONZINENZO; Rumor in casa, Proyecto Rock Popayán), and drums percussion of her brother Marco Becking Fernandez. Her art is personal, committed and empowering, put into rhythm & rhyme. S.B-King© grew up with music, since she was born, and improvised her first songs at the age of 7.

In 2010, at the age of 12, she recorded her first song: “Scar”, a melodic soft rock song. In 2013 she composed “Child Soldiers”, a beautifully simple but profound and compelling protest song. In 2014 she recorded “Broken Heel” a soft rock epos about a broken heart. In 2016 recorded a new song “Final touch”, exploring more urban Dubstep sounds. In 2019 she recorded her latest single, “La Tormenta”, of her up-coming album “Firme voy Pisando”, with a fresh new style, integrating an emancipated Reggaeton with strong Reggae and clear Rock influences. S.B-King© is a versatile artist in the making, with a great potential to embrace different styles and moods making it her own trademark.