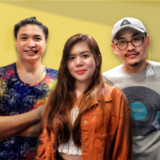 Mari is a trio formed by Mark, Gori, and Marie. Mark is on guitars; Gori is on bass, percussions, and songwriting; Marie is on songwriting and vocals. They have released four singles in the past year, with their first official release Sana. Mari is making their way into the Pinoy Indie music scene by being included in the Pinoy Indie Mix. The band’s latest single Pwede ba has been featured in Monster RX 93.1’s IndieGround Playlist. Their songs have been added to over two-thousand Spotify playlists, including their 2nd and 3rd singles, ALAM and Old Normal. Check them out on their socials and get to know them more!