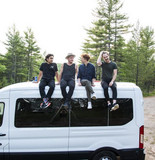 Toronto-based alt-rock outfit Birds of Bellwoods have wasted little time making an indelible mark on Canada’s musical landscape, having amassed an impressive pile of achievements and accolades in a few short years on the back of their boisterous blend of anthemic alternative, folk, and pop music. Now signed with eOne Music Canada, Birds of Bellwoods released their highly anticipated debut LP, Victoria, in late 2018. The album invites listeners to join the band’s high-energy musical parade built on honest, emotive songwriting and laced with sweet, sticky hooks. Much of the attention to come their way thus far has stemmed from the band’s energetic and engaging live performances. They’ve crossed Canada and dipped into the U.S. for all kinds of dates, including a slew of major Canadian music festivals including Osheaga and Festival D'ete, support slots with the likes of Arkells and Wintersleep, and some high-profile headlining sets of their own.