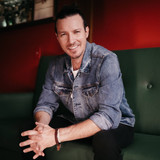 Rayne Johnson is a country music artist whose vocal style adds a touch of soul to songs that offer a fresh perspective on down-home themes. After years of paying his dues, Rayne's smooth but expressive tenor started winning a larger audience in 2019 when his first two songs began making noise on streaming and radio. Hailing from Fairfield, OH, Rayne grew up listening to Johnny Cash and Merle Haggard around the house. He first began singing at Sunday services; later crediting his exposure to gospel music for inspiring the soulful side of his delivery. There, he overcame his stage fright which led to him fronting a handful of local groups during his high school years. Later on, while working on the railroad, he spent his nights building a regional following, playing honky-tonks and opening for Hunter Hayes, Riley Green & Randy Houser, among others. Rayne also sang on publishing demos for songwriters promoting their songs. This led to him being heard by an independent producer who instantly recognized his talent and undeniable star quality. In late 2018, Rayne released Laid Back, on Spotify. It proceeded to do well, racking up over 1.7M plays in a few months. The reception to Rayne and Laid Back was so strong that Boston radio began playing his 1st radio single Front Seat before it was officially released. Rayne’s interests include family, waterfowl hunting, hiking, camping, and college football.