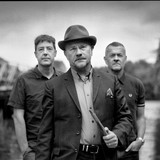 Thirty years ago a young Northern skinhead band named Bradford from Blackburn Lancashire were handed the baton by Morrissey as the band to blaze a trail in English indie music following the demise of the Smiths. Producer Stephen Street, who had just come off the back of an extremely successful collaboration with Morrissey on his early solo recordings, immediately signed the band to his brand new Foundation label.

Stephen and the band made camp in Wales summer 1989 and during three intense weeks of creative endeavour produced their debut album 'Shouting Quietly' which was released in March 1990 to critical acclaim. The best part of three decades passed and Turntable Friend Records re-mastered and re-released a 30 song collection in 2018, entitled Thirty Years Of Shouting Quietly. The album was re-appraised as a 'lost English classic'. This rekindling of belief slowly re-ignited the magic and chemistry that always existed between the band [now Ian H and Ewan Butler] and Stephen Street. So much so, that Stephen became a fully fledged band member and together they now stake their claim with this lovingly crafted jewel of a new album. Ladies and Gentlemen, Brothers and Sisters, One and all we give you in the year 2021 the brand new Bradford album 'Bright Hours'.