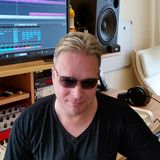 Frank Arnold began his musical journey at the age of nine when he discovered an accordion in his parents’ flat. After many years of accordion lessons, his musical interest changed direction when he first heard Jean-Michel Jarre’s “Oxygen IV” on the radio. Henceforward it was clear that his heart beats for electronic music. In the early 90s, Frank started to focus on sound design and synthesis. During this time he made some demo songs, which unfortunately, received little interest by record labels. Henceforth, he invested more of his time in software development, rather than music. However, in 2004, inspired by music from Chicane, Enigma, and Israeli trance artists, Frank once again began to produce music and develop his own musical style, which is a combination of ambient, trance, and pop.