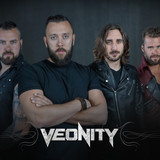 Veonity is a Swedish power metal band playing energetic, guitar-driven music reminiscent of the late 90’s German/Swedish sound: powerful choruses, majestic choirs and catchy melodies. Veonity was established in 2013 by Anders Sköld, Samuel Lundström and Kristoffer Lidre. They were bound together by their love for bands like Helloween, Gamma Ray, Stratovarious and Edguy (to name a few) and a vision to create epic songs that never die. In 2014 Joel Kollberg brought his drumming skills into the equation and the line-up was thus completed. Veonity has released three full length albums, Gladiator's Tale (2015), Into The Void (2016) and Legend Of The Starborn (2018) and have done numerous shows all across europe with bands like Powerwolf (Russia, Belarus 2017), Freedom Call (Europe 2017) as well as shared the stage with bands like Sabaton, Dragonforce and Sonata Artica. In June 2017 the four-piece reached a great milestone in the band’s career: playing at the biggest metal festival in the country, Sweden Rock Festival.