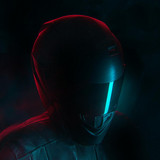 Since founding the project in 2015, PYLOT has established himself as one of the most innovative and recognizable creators in and around the world of Synthwave. The artist handles cyberpunk and science fiction themes with remarkable subtlety and attention to detail, creating atmospheric soundscapes filled with lush synth melodies and energizing rhythms. By combining influences from modern EDM, Synthwave, and scores for film and movie soundtracks, PYLOT has carved out a personal style that is sometimes aggressive, sometimes thoughtful, and always compelling. The cinematic aspect doesn’t end with the music, either. The PYLOT project is deeply rooted in a narrative format, with each new release accompanied by original artwork as well as episodic stories that listeners can enjoy on the artist’s website. After releasing an initial series of singles, PYLOT unveiled his debut EP Shadowtask in 2017 with the independent Canadian label, Monstercat. The five-track release was an unqualified success, gaining millions of streams and attracting a large fanbase in the process. A series of independently released singles followed, this time with an even more exploratory mindset. At the start of 2019, PYLOT signed his second EP with the well respected Synthwave label, FiXT Neon.