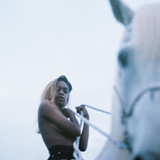 The "Darkwave Duchess" of Awful Records, the rap crew hailing from Atlanta, Georgia, ABRA is a singer, songwriter, and producer whose music has often been described as a hybrid of goth/r&b/soul/freestyle/dance/house/pop. While her music hasn't exactly found a home in a single genre, with confidence and certainty she makes genre bending records that are at times nostalgic, reflective, introspective, triumphant, otherworldly, romantic, emotional, celestial, and yet glitters mischievously with sentiments and bass lines from the underworld. Born of nomadic parents, she grew up with a strong sense of non-belonging- a trait many artists find within themselves. This loneliness caused her to turn inwards and became the start of her reflective and observant journey into art and music.

After being born in New York, growing up in South London, and finally landing for the long haul in Atlanta, she eventually connected with Awful's Father in 2014. Then, in 2015 as a full-fledged Awful artist, she released an EP, BLQ Velvet in February, and quickly followed it with her debut album, ROSE, in the summer of the same year. PRINCESS, a six-song EP with a more defined sound highlighted by the yearning neo-freestyle track "Crybaby," arrived in the heat of July 2016 and was issued through a partnership between Awful and Matador subsidiary True Panther Sounds. In 2017, Ninja Tune pressed and reissued ROSE onto vinyl which can be purchased on her artist website www.darkwaveduchess.net