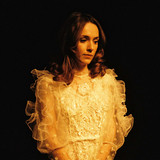 The half-Irish half-Catalan composer Núria Graham published her debut album "First Tracks" in 2015 with only 16 years. In just over two years, she released "Bird Eyes" + "In The Cave" (EP) and almost next her second feature "Does It Ring a Bell?" (2017), an album that positioned her on the national scene as an essential artist to understand homemade folk-pop. But during these last two years Núria has had no rest. After a tour that took her to the stages of the most relevant festivals and venues in the country with incursions into Portugal, Berlin, France and London; Núria Graham published “Marjorie” (2020), an exquisite album that she presented at Sala Apolo (Barcelona) with sold-out. A magical journey through ten songs that captured the attention of national and international audiences and press (BBC, Atwood Magazine, etc). Now she continues with “At Last” (2021), a two-songs single that acts as a hinge between “Marjorie” and new sonic stage. It will culminate with a new album.