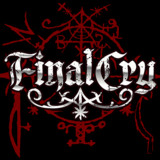 FINAL CRY is a band rooted in thrash metal, founded in 1989 in Lower Saxony, Germany. Stylistically, the band has always stood for sawing guitars and raging drums, as well as fast, powerful metal, which bridges the musical styles from the speed & THRASH metal of the 80s to the more grim and dark Scandinavian DEATH & black metal styles of the 90s. After several changes at the mic post, the band's style has been characterised by increasingly intense, aggressive vocals in recent years. In April 2021, the band announced that they join forces with

Across the Burning Sky (and former Subconscious) frontman Aki to fill permanently the notoriously vacant vocalist position. In March 2021, the band signed with German label Black Sunset/MDD Records to release the follow-up to the 2018 released long player "Zombique". In doing so, the guys and the girl manage to reinvent themselves without losing sight of their roots. According to the first samples, you can expect a real neckbreaker. Stirring Guitars and a great feeling for almost atmospheric, hymn-like melodies should enthuse both old and new fans of the band from Lower Saxony. MERCH: mdd-records.de/finalcry