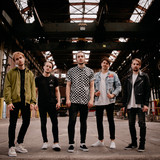 Formed by high school friends in 2014, rockband The Overslept set out to create music like the records they grew up on and to pass along the feeling they got from them. Citing such influences as Fall Out Boy, Panic! At The Disco and Paramore, their vision of what The Overslept should sound like was clear immediately; energetic songs, balancing out punchy drums and heavy guitars with frontman Sem’s catchy vocal lines and a pop-minded approach; best described as modern rock. After self-releasing a couple of EP’s and singles, the band started to gain notoriety when they released the single “Stolen Car” and quickly rose to playing major festivals, headline tours and getting steady radioplay. The Overslept stands for inclusivity and sincerity and doesn’t shy away from serious topics and themes. Though the band aims to move as many listeners as possible, their drive comes from making the music they love, together.