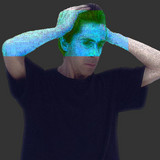 John Ruskan is an American New York based singer-songwriter / multi-instrumentalist. His music can be described as: Electronic-acoustic, ambient-groove post-triphop for deep trance listening. John started out in folk, writing and performing on acoustic guitar, but soon got deep into synths and electronic production. He is somewhat unique in the current music scene in being a serious singer-songwriter as well as an accomplished electronic musician and audio engineer. John worked for five years as a pro recording engineer in New York City. John's material reflects his other major interest - transformational Eastern philosophy. Even so, his lyrics are never preachy or spacey, but are usually dark gritty realistic personal snapshots with psychological insight, intending to enlighten. To help achieve this goal, the music is designed to induce a deep trance listening experience. Innovative repeating ethereal electronic / acoustic textures and subtle groove rhythms are carefully constructed and blended. To get the most out of the music and to allow it to trigger inner excursions, John encourages the listener to experience it with earphones, lying down with eyes closed. John performs on all instruments and vocals, and does all the audio engineering. His original artistic influences include Massive Attack, Moby, Portishead, Enigma, Babble, and many other trail-blazing innovators from the late 90's trip-hop movement.