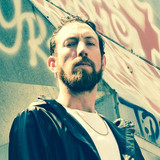 Melbourne-born singer, guitarist and songwriter Ed Fraser relocated to Berlin from Australia in 2013, founding the Berlin-based post punk band Heads. while still on the tarmac, so the story goes. Heads. released three critically acclaimed LPs - Heads. (2015), Collider (2018) and Push (2020) - with label releases in Europe, Australia and the USA, extensively touring Europe and North America with bands the likes of Metz, Protomartyr, Young Widows, Daughters, Nothing and many more. A notedly restless songwriter, Ed expanded his musical repertoire with his debut solo record, Ghost Gums, in late-2019. Released by renowned German label This Charming Man Records, and recorded over one week in Berlin with a dynamic band including Spike Rogers on drums and Rosa Mercedes on bass, on Ghost Gums Ed explores a more personal side. Here Ed’s deep vocal expresses somber and romantic lyricism amongst fluid, vibrant and at times more experimental instrumentation and vocal layering. From beginning to end Ghost Gums explores themes of loss and romance, and is an exploration of new and uncharted territory for Ed as a songwriter. In March 2020, the band was packed and ready to begin their first tour, a month of dates across Europe. With a global pandemic and everything cancelled, Ed instead recorded and released Saw the Sails Come Down from his home in Melbourne, a song grasping at high hopes from isolation. Ed and his band are looking forward to get back to it again soon.