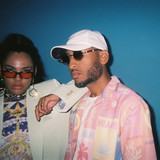 MariaDennis is an Amsterdam based duo consisting of Zanillya and Humphrey Dennis. They have been working together for almost a decade now. Zanillya and Humphrey officially formed the group in 2020 to get out some of the more playful, fun, dance and pop-oriented ideas that didn’t necessarily fit their solo projects. Their first single ‘You Extra’ is the soundtrack to the latest SEAT Ibiza & Arona worldwide AD that will be shown on TV in over 180 countries. Their sophomore single ‘Hold On’ was released in June on the iconic Australian label Future Classic (Flume, Nick Murphy, SOPHIE, Flight Facilities, Ta-ku). MariaDennis are a force in creating their own fusion of sounds and are very well versed in translating the visions of brands around the world.

Their creative efforts have continuously put them in positions of acclaim with plenty of major brands looking to use their music for their campaigns. So far their music has been used by FIFA, UEFA, Nike, Colgate, Comfort, Vodafone, Electronic Arts, Showtime, MTV, River Island, Boots UK and many more. Gearing up to release their first EP this year, MariaDennis will be showcasing a different side to their already versatile sound.