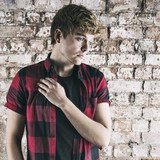 A singer-songwriter and multi-instrumentalist who's music is filled with emotive language, compelling vocal harmonies and the melodic tones of modern country music.   Danny was brought up around the musical influence from his Irish family in Bristol, UK and began his musical career as part of a rock band who toured the UK and Europe. As he began his degree and Masters in Songwriting and Business at BIMM, he was exposed to country music.   Upon attending the 2017 Country2Country, London, Danny decided that performing country music was something that he felt he connected to. Danny takes his country influence through artists such as Brett Young, Rascal Flatts & Russell Dickerson and by putting together powerful melodies with beautifully accomplished harmonies led to his debut EP release in 2017.   Danny's passion and admirable motivation has been shown through the success of his music in such a small period of time. In 2019, Danny was awarded UK Country Artist of the Year, UK Male Country Singer of the Year and his #1 UK iTunes Country single 'When I See You', UK Country Song of the Year. He has been nominated for multiple British CMA awards and has toured in Sweden, Italy, Nashville and the UK. He has supported the likes of Charlie Worsham, Dylan Schneider, Lockeland and Jesse Kinch.