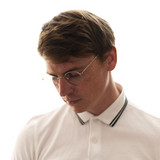 Ally spent years on the road with To Catch a Thief. Playing the UK's "toilet circuit" with the band and loving almost every minute of it. "It was hard at times. Rolling up to a venue a long way from home and playing to the bar staff can be a tough gig. But those guys are my best friends.

We made some rad records, and played some incredible shows along the way." Fast forward 10 years, and Ally is putting out music again. Now based in Ottawa - Canada, he's swapped the sweaty small stages for the studio. "I've fallen in love with playing with music again. Recording and releasing records becomes a business. You hear artists struggle with it all the time. But music is play, and it should be fun. That's the journey I'm on with the music I'm writing now."