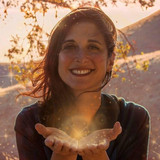 Karen has toured the world and performed in front of over 50,000 fans, sharing the stage with everyone from Lisa Loeb to Ziggy Marley to the Red Hot Chili Peppers. She won the John Lennon Songwriting Contest and Global Music Awards and has had her music in multiple feature films, including Winona Ryder’s movie Boys. Her music video “You’re My Home” was awarded Most Positive Video

in the Posi Music Awards and her combined music videos have been viewed over half a million times. Her latest album, In My Room, was chosen as one of the top 10 albums of the year in Aquarian Magazine, alongside Sam Smith and Van Morrison. Karen’s innovative approach to songwriting has been universally described as healing. She intentionally creates music with this goal in mind by combining her 20+ years as a health practitioner with her passion for songwriting. She recently completed a field study proving that her music reduces stress and pain levels in her listeners, as well as elevates their mood. Karen has also been featured on Ted Talks and Good Morning America for her work as a vitality and health expert.