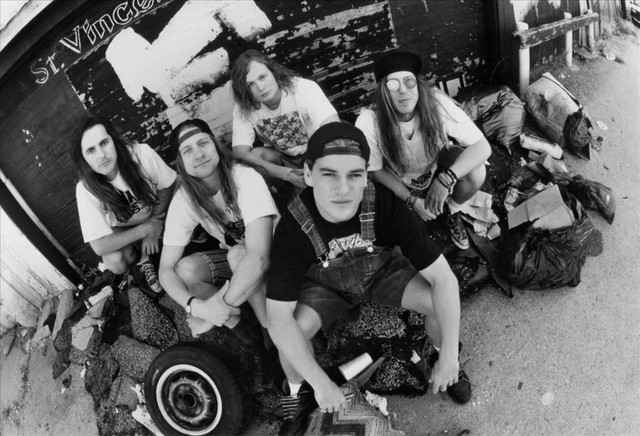 Formed in Isla Vista, California, Ugly Kid Joe (whose name is a response to Pretty Boy Floyd) feature vocalist Whitfield Crane, guitarists Klaus Eichstadt and Dave Fortman (who replaced Roger Lahr), bassist Cordell Crockett, and drummer Mark Davis. The group plays basic pop-metal with touches of funk and a bratty, parodic sense of humor. Their debut single, "Everything About You," went Top Ten and helped their mini-album As Ugly as They Wanna Be become the first short-form LP ever to be certified multi-platinum. They went Top Ten again with a straightforward cover of Harry Chapin's "Cats in the Cradle" in 1993. The band released its second full-length album, Menace to Sobriety, in 1995; Motel California appeared the next year. Motel California turned out to be Ugly Kid Joe's last album for a major label. They split in 1997, a year after its release, and over the next decade the bandmembers played in various post-alt metal bands. As the first decade of the new millennium came to a close, there were rumblings of new Ugly Kid Joe activity, rumors that came true in 2010 when the group reconvened for a tour. Recording soon followed and the fruits of UKJ's labor was Stairway to Hell, an EP that appeared in the summer of 2012 and was later expanded to a full-length with various oddities; the longer Stairway to Hell showed up in 2013. In 2015 the band released its long-awaited fourth studio album of all new material (the group's first in 19 years), the crowd-funded Uglier Than They Used ta Be. ~ Steve Huey, Rovi