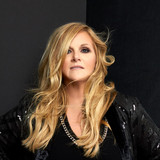 ABOUT TRISHA YEARWOOD Following three decades in the spotlight, numerous GRAMMY®, CMA®, and ACM® Awards to her name, countless multiplatinum certifications, and millions of fans entertained, the same passion still motivates and moves Trisha Yearwood. The singer, actress, author, chef, personality, and entrepreneur derives deep fulfillment from simply walking up to a microphone and pouring her heart out by way of a celebrated powerhouse voice. In 2019, she continues that tradition with her first solo full-length since 2007, a collection of Frank Sinatra covers and one original entitled Let’s Be Frank. At the same time, she remains a timeless entertainer whose influence permeates multiple facets of culture. Beyond twelve studio albums, she hosts the EMMY® Award-winning Food Network hit Trisha’s Southern Kitchen and her Facebook Live “pre-show,” T’s Coffee Talk. At the forefront of a veritable lifestyle empire, she penned three New York Times-bestselling cookbooks and has designed cookware, furniture, home accessories, and area rugs. Trisha has also collaborated with Williams Sonoma on her signature best-selling cocktail mixes like “Summer in a Cup,” “Autumn in a Cup,” and “Christmas in a Cup” as well as a variety of food products ranging from a signature biscuit mix to a complete Thanksgiving Dinner.