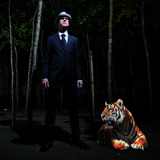 POPSHOP aka Martin Akeret founded his own label Poetenpop Records in 1997. From then on he released his music under pseudonyms like Gary Rich, Drama or Drama Martini. Oliver Kapp, head of Indulge/Raygun (Hamburg), signed Popshop for his album «SALON BIZARRE» (2002). The album received N°1 chart features in Germany, namely in De:Bug and in Groove. The following work «THE DISTANCE BETWEEN US» was also released on Raygun. Due to the good response, Popshop was invited to Montréal (Canada) for two live shows in 2004. «NEW BONES» was released on Alpinechic/Irascible, followed by the vinyl EP «Plaisir Noir» on Stattmusik (2008) and was accompanied by a special highlight: The well-known UK act Zoot Woman engaged Popshop as tour support for the Swiss gigs. Finally, another album followed with «A WARM PLACE WITHOUT MEMORY» including «Basic Life Support», which was voted best-of on «CH-Filmszene» on SF1. With the audio-visual DVD/CD work «VISUAL HEART BLOOD», Martin broke new ground in 2013: He brought together all the video clips and making-of films of the last few years. In the following years, he concentrated on building up his band «Smooth Attack». He also produced several features with various singers, including the single «Until We‘re Grown» with Dallan. Currently Popshop returns to Raygun Records with «GEOMETRY FOR BROKEN PEOPLE». 10 amazingly colourful tracks between pop-electro and house with Popshop‘s rhythmically layered synthesizer soundscapes and acid-303. | www.popshop.cc