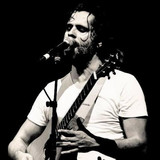 Ten years ago António Mão de Ferro released his first album, Karma Train, his career that’s encompassed three more albums, several singles, a slew of soundtrack compilations and arresting live performances fronting a variety of ensembles. “Fun is a trite word. I kind of hate to use it — but at the same time, I don’t know how else to say it,” António Mão de Ferro says of the 10-song set, which was produced by him and recorded at his studio in Oporto. “It was just an enjoyable process. These songs reflect just my joy of songwriting, what I enjoy about writing songs. they feel free to me. I didn’t have to go searching around through cupboards to find the missing pieces; all the puzzle bits would just sort of burst to life in front of me. I just grabbed them and pieced them together and then would be surprised at what was in front of me” “It’s an experience unlike any other I’ve had making a record, and I cannot forget all the support given by my friend Bernardo Fesch on lyrics” and thanks to Kiko on lyrics on “On the Road”. “I know I was hearing certain different instrumentation — a sharper sound, a broader sound,” explains António Mão de Ferro, who for the first time ever put together detailedfully-rendered. “I think that was sort of a turning point. I just kind of turned off the inner critic and got out of my own way and started making music.”