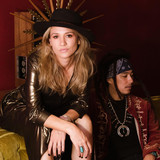 Effie Zilch and the Houseband

“I remember Steve jamming with members of Hot Tuna, Jefferson Airplane and Gary Garcia Band, and thinking, I’ve got to be in HIS band,” reminisced Effie. “She stole all my records, but that’s cool because they helped to shape our sound”, said Steve. As the years went by, Effie helped to launch the world’s first music streaming platform, Steve racked up a few Grammys, and eventually the two decided it was time to reunite and continue creating the music that they set out to make as kids. Effie Zilch and the Houseband released their debut album (Letters from a Basement) in 2019, and their sophomore album (Old Deals) is anticipated later this year. Gospel of Gold, the first single from Old Deals, recently released in partnership with charitable playlist curator SongAid. With each stream, proceeds will be given to the NAACP, as well as WhyHunger’s Rapid Response Fund, which empowers Black, Brown, and Indigenous communities to build equitable food economies. Other contributing artists include Santana, Yo-Yo Ma & The Silk Road Ensemble, Wilco, and more.