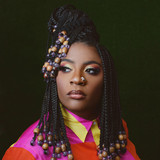 Platinum-certified Oakland-born rapper and GRND.WRK label founder KAMAIYAH quietly positioned herself as not only a force on the microphone, but also as a sharp businesswoman. After nearly 100 million streams, sold out shows everywhere, and widespread acclaim, she grew into a bright future ignited by the Got It Made mixtape and completely realized via her forthcoming 2020 full-length debut album—on GRND.WRK/EMPIRE.   It took a five-year grind to reach this realization. Following the success of her 2015 first single “How Does It Feel,” KAMAIYAH leaped out of the Bay and to the top of the conversation with her debut mixtape, A Good Night in the Ghetto. A tastemaker favorite, it claimed spots on 2016 year-end lists by Pitchfork, Rolling Stone, Complex, and The Guardian. She featured on YG’s platinum-selling “Why You Always Hatin?” with Drake from Still Brazy and joined the Compton MC on tour. She kicked off 2017 on the coveted XXL “Freshman Class” cover and dropped the fan favorite Before I Wake. 2018 saw her co-star in a Sprite commercial alongside none other than NBA legend LeBron James. Along the way, launched GRND.WRK as “one of the industry’s only labels owned by an African-American female.” Aligning with EMPIRE as a partner, she sequestered herself in the studio, capturing the fire of her earliest output and laying down what would become Got It Made. She propelled the project to further fan and tastemaker praise. She continues to make boss moves in 2020 with more to come.