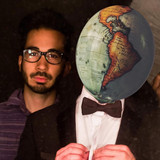 Steve Lush is an indie-pop songwriter, singer, and piano player. Steve has performed 2500+ original and piano performances since age ten, including Carnegie Hall in 2010. He plays festivals and shows in LA, Chicago, and internationally, including shows last year in Athens, Bristol, Sofia, and Kyiv. He has written over 400 songs and has released 12 singles since last year. He has played music alongside Saturday Night Live cast members, the lead singer from Sublime, and other celebrities and personalities.