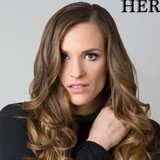 Ali Auburn is a singer/songwriter from southern New Jersey. She began writing songs at age six and began training vocally with world-renowned opera singer, Badiene Magaziner, when she was 13. Badiene helped develop and strengthen Auburn's four octave range, and Ali has since been classically trained in opera, jazz, broadway, pop, and country. At age 17 she taught herself to play guitar and began spending her free time writing songs. She started playing her original songs at local open mics where she received immediate attention for her vocal and writing ability; shortly after, she began giving full length shows in and around her hometown and Philadelphia. When Ali turned 18, she began taking regular trips to Nashville, Tennessee to work with and learn from established songwriters and song publishers. It is in Nashville that Auburn honed her songwriting craft, though she credits the Philadelphia music scene for shaping her performance style.

Ali’s stage presence and live shows have won her loyal fans and many opportunities: She has been lucky enough to open for several national touring acts including country music stars Chris Young and Zac Brown Band. She was also chosen to open for folk legend Peter Yarrow (of Peter, Paul and Mary), and was asked by Yarrow to join him on stage during his set to sing “500 Miles” as a duet.