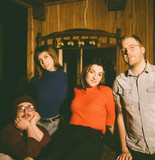 Unabashedly poppy and shimmery, Biitchseat’s music takes the aesthetic of 90s alt-rock favorites like Liz Phair and The Breeders and re-engineers it to be as catchy as it is complex and timeless. Formed by best friends Talor Smith (guitar & vocals), Kristin Schmit (guitar & vocals), Connor Hunt (bass) and Evan Searls (drums), Biitchseat are a friendly reminder that it’s ok to go to a show, dance a bit, and leave happier than you arrived. The unabashed joy in their music is only matched by their performances, which are always energetic and at times captivating and vulnerable. With lyrics that thoughtfully lay bare the many anxieties and discomforts faced by the modern 20-something, such as grief, failure and the reluctance to accept adulthood. No matter how heavy the subject matter, Smith’s words on “To Name All the Bees in the Backyard” are lifted by the album’s buoyant, reverb-drenched guitar leads, genre-bending bass lines and powerful vocal performances.