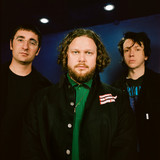 After winning the Mercury Prize in 2012 with their debut album An Awesome Wave, Joe Newman [vocals, guitar], Gus Unger-Hamilton [vocals, keyboards, bass] and Thom Sonny Green [drums, percussion] made the Grammy-nominated This Is All Yours (2014) and followed it with Relaxer (2017). Along the way they plotted globe-trotting tours, sold out Madison Square Garden, the Hollywood Bowl and the O2, amongst many others, and headlined almost any festival you care to mention. They sampled Miley Cyrus, collaborated with hip-hop alt. heroes Pusha T and Little Simz on 2018 remix album Reduxer, and made history by co-creating the first immersive sound show of its kind at New York’s Forest Hill Stadium in the summer of 2018, where 360 degree speakers made the performance sound like it was optimised for every single member of the audience. The Dream, alt-J’s fourth album, began life on schedule when the band first regrouped at their own studio, a rented house in east London where they write and record. Navigating Covid as it arrived and hung around – with Green shielding throughout the pandemic and often working remotely, The Dream was recorded from August 2020 until June 2021 with long-time producer Charlie Andrew. What emerged was a record of intrigue and ambiguity that fizzes with a rejuvenated sense of experimentalism. The Dream is the sound of a band experimenting more than they ever have, recharged and reinvigorated – the twelve tracks make for the fullest sounding alt-J record yet.