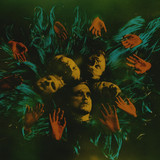 Since birth, ORANSSI PAZUZU, 'The Demon Of The Wind With The Colour Of Cosmic Energy,' has never been satisfied to stick with a formula. Each album has seen the band expand upon its previous incarnation and then, like a supernova, blow it up and transform again into something recognizable but completely new. The band was formed in 2007 by Jun-His, Ontto, Korjak, Evill and Moit. During its initial months, the band wrote songs collectively, fusing together various influences from space rock to black metal, to capture different states of mental cosmos. And from that point on, they have released 4 full length albums. "Muukalainen puhuu", "Kosmonument", "Valonielu" and "Värähtelijä". In 2018, ORANSSI PAZUZU and their Tampere cohorts DARK BUDDHA RISING, known for their grandiose slug-paced ritualist doom metal, recorded a special album. The amalgam of these two entities was melted as one on "Syntheosis", and released under the moniker WASTE OF SPACE ORCHESTRA. Oranssi Pazuzu`s fifth album which is titled "Mestarin kynsi" will be released on the 17th of April 2020 worldwide through Nuclear Blast Records.