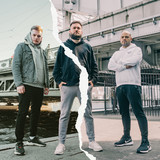 Three foreigners met in Tokyo. Pavel from Russia, Eduardo from Brazil, and Damian from the US. Eduardo and Pavel met while working for the Olympic Games and are like "Olympic gypsies" traveling from city to city every 4 years to organize the Games in a new country. But work is not the only thing in common. Eduardo is from a unique city called Brasilia, which was built in the 1960's, and the architects were inspired by Soviet Russia's urbanism (wide streets, concrete block-like buildings connect the city like a dark labyrinth). Such grim surroundings inspired Eduardo and shaped his musical taste. The same can be said for Pavel who was born in Soviet Union. Before starting Relentless 3, they both played in black metal and melodic death bands. Upon meeting Damian in Tokyo, they were surprised he spoke a bit of Russian because he was living in Moscow for some time. And he is a great musician. Put it all together and you get "Line In the Sand" - their debut track. Much more music to come. More info - https://band.link/relentless3