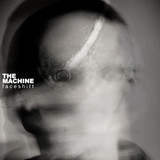 The Machine is a rock band from the Greater Rotterdam Area, The Netherlands. Its members are David Eering (guitar/vocals), Davy Boogaard (drums) and Chris Both (bass). Founding members Eering and Boogaard started the band in 2007, taking inspiration from 90’s/00’s stoner rock and 70’s psych with a preference for lengthy instrumentals. Since then, they developed their own sound, one that is known for its high volume and coherent diversity. Throughout the years, the approach shifted towards a more aggressive and song based formula. The result is a style with its roots in all things heavy rock, drew on big riffs, noise and experiment. The Machine toured Europe several times and repeatedly played at the major European scene-related festivals. Having a back catalogue of five full lengths and one split record, The Machine released its sixth album Faceshift (July 2018) on Eering’s imprint Awe Records. Faceshift is a perfect illustration of the band’s maturing sound, being their most heavy, noisy and accessible record to date. Longtime bassist Hans van Heemst parted ways with the band in early 2018, Faceshift being his final contribution.