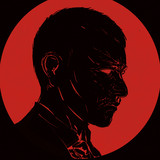 Following in the footsteps of Cohen and with his deep and sultry ''Bowie meets Joy Division's Ian Curtis'' vocals, Cairo born Montreal based singer/songwriter, TEROUZ brings his signature ''Hypno electro/noir'' to the scene by curating his original songs with his taste for 90s nostalgia and 70s & 80s electro-pop/rock elements. His first single "Outstanding" (2019) has been deemed one of the year's best songs by California's Rawckus magazine. "Outstanding" is better than excellent, entering the rarified realm of superlatives. This is one of the best tracks of the year, sexy, powerful, and inspiring." -Rawckus magazine. in 2020, his second single, "Burn," has received the Factor Grant making him one of the 33%Canadians nationwide to receive the Factor Artist Development grant during the first year of the pandemic. Terouz released his third single in 2021, "Big Boy Games." The music video had him fully integrating his illustrations with his music. It was added to Exclaim's The Eh! List 🇨🇦 on the Friday of its release. ''Trust me, you’ll love every second of this electro roller coaster.'' -Turn Up The Volume🇧🇪 ''Hypno-noir ‘’ he calls it, a cinematic, muscular sound imbued with wickedly erotic sensations, rife with intensity yet soothing with its pacing.